The Seattle civic activist and philanthropist Mary Gates and her husband William H. Gates strived to create a quality environment for their children inside their home, as well as outside in the community. The son and daughters of Mary and Bill Gates have all been active as volunteers in civic organizations within their communities. The Seattle-King County Association of Realtors named Mary Gates and her family First Citizens of 1995 for their community service and philanthropy. It was the first time in the 57 years of the award that the Association honored an entire family 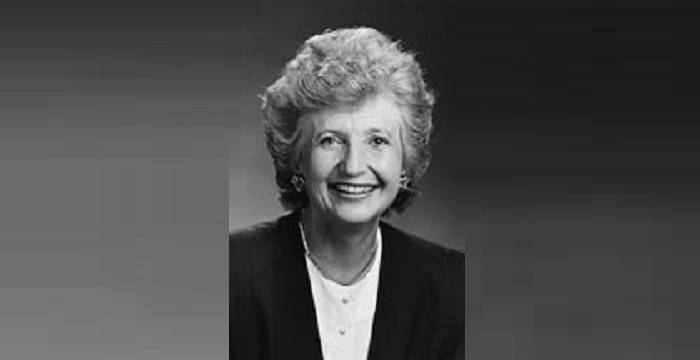 Mary Maxwell's Invocation at the 2012 Aging in America Conference Mary Maxwell reminds us once again that laughter is the best medicine with her invocation a.

Mary Gates grew up in Seattle's North End and graduated from Roosevelt High School where she was class valedictorian and a star forward on the girls' high school basketball team. She received a degree in education from the University of Washington 1950. While at the UW, she met law student William H. Gates Jr. (as he was then known) and they married. While he worked as a Bremerton Assistant City Attorney in the early 1950s, she taught school there.

The Gates family moved to Seattle where William (1925-2020) practiced law. Mary involved herself in a wide array of civic activities in Seattle, volunteering as a lecturer at the Museum of History and Industry, serving on boards for the Seattle-King County United Way, KIRO, Inc., Washington Gives, and Leadership Tomorrow. She was the first female president of King County's United Way, the first woman to chair the national United Way's executive committee, and the first woman to be a director of First Interstate Bank of Washington. A national United Way award was established in her name for 'exemplary projects' typifying Gates' emphasis on cooperation between staff and volunteers.

In 1972, she joined the Board of Trustees at Children's Orthopedic Hospital and worked on a variety of committees before heading up the board's legislative affairs committee. She lobbied officials in Olympia and in Washington, D.C. on issues that affected the hospital and children. It was Gates who proposed to the trustees at Children's that they form a foundation to manage the hospital's investments and giving programs. When the Children's Hospital Foundation was organized in 1985, Gates chaired that board. She also chaired the committee that drew up a strategic plan for the board, which had been formed in 1907.

In 1975, Governor Dan Evans (b. 1925), a former bridge partner of Bill and Mary Gates, appointed Mary Gates to the University of Washington Board of Regents. In the mid 1980s, she led a movement on the board to cut, and then divest, the University's investments in South Africa to pressure the government there to change its racist and oppressive system of apartheid. She served more than 18 years on the Board of Regents. In 1993, the First Interstate Bank named Gates to its board of directors.

Mary Gates died on June 9, 1994, the day before she was to be honored by the Seattle Municipal League of King County as Citizen of the Year. 'One of Seattle's greatest treasures has passed from the scene,' said Mayor Norm Rice, who called her 'an extraordinary civic leader and philanthropist, a champion for social justice and a remarkable human being.'

Known then as William H. Gates Jr., Gates received his bachelor's degree (1949) and his law degree (1950) from the University of Washington. After working as an assistant Bremerton city attorney, he moved to Seattle where he practiced law. He joined the firm of Shidler, McBroom, Gates, and Lucas as a partner in 1964. In 1990, this became Preston Gates & Ellis. Gates served as president of the Seattle-King County and Washington State Bar Associations. In 1991 he received the University of Washington School of Law Distinguished Alumnus, and in 1992 he received the Washington Bar Award of Merit and the American Judicature Society Herbert Harley Award. He retired from the firm in 1997.

William Gates worked for many area organizations, including the Seattle Chamber of Commerce, the Municipal League, the Seattle Foundation, and the Seattle Repertory Theatre. He supported United Way and was chair of the Seattle-King County United Way Campaign in 1989. He served on the University of Washington College of Arts and Sciences Visiting Committee (1966-1975) and the School of Law Visiting Committee (1983-1986). He was a director of the UW Foundation, and a member of the Board of Regents beginning in 1997.

In 1999 Gates took over the newly formed Bill & Melinda Gates Foundation, which was endowed by his son, William H. 'Bill' Gates III, and his daughter-in-law Melinda French Gates. It is the largest philanthropic organization in the world and it focuses on Third World health, online learning, and education. Because of the prominence of his son who shares the name William H. 'Bill' Gates, the elder Gates came to use 'Sr.' rather than 'Jr.' following his name.

Bill Gates grew up in Seattle's Laurelhurst neighborhood and attended Lakeside School where he developed an interest in computers. He attended Harvard, but dropped out in 1975 in his junior year with classmate Paul Allen to found what became the Microsoft Corporation. He moved back to Seattle in 1979. His mother, Mary Gates, influenced him to become one of the highest-profile contributors to United Way and to start a gift-matching program at Microsoft.

Gates, reputed to be the world's richest man, has been generous with his wealth. He has given to the University of Washington to construct a computer sciences building, a scholarship fund named after his mother, and a molecular biotechnology department. In 1994, he endowed the William H. Gates Foundation and other programs that concentrated on Third World health care, online learning, and education. In 1999, the family reorganized the foundations into a single Bill & Melinda Gates Foundation, the largest philanthropic foundation in the world with assets of $21.8 billion (in 2000).

William and Mary Gates's youngest child, Libby Gates Armintrout serves on the Board of Trustees for University Child Development School, on the advisory board of the Carlson Leadership and Public Service Center at the University of Washington, and she volunteers for the Make-a-Wish Foundation and for the Seattle Schools Fund for Excellence.