Shaka of the Zulu 1.0 Adds Shaka and the Zulu to Civilization 6. In 1816 AD, Shaka would seize the chieftainship of the relatively insignificant Zulu tribe; two years later he would assume leadership of his mentor's tribe, the Mtetwa. Over the course of the next decade Shaka and his warriors conquered and absorbed most of the tribes in the region, building the largest native empire ever seen in southern Africa. Shaka isn't a bad choice for a cultural alliance, seeing as your loyalty pressure on his cities usually won't make that much of an impact anyway thanks to Zulu loyalty advantages. Shaka won't have the Paranoid hidden agenda (which makes leaders prefer civs with smaller armies), as it conflicts with this main agenda.

Well apparently I incorrectly counted the amount of Civ’s that would be featured in the Rise and Fall expansion, as tomorrow people will be able to play with Shaka of the Zulu as well as the other new Civ’s. To recap, Rise and Fall adds Korea, The Netherlands, Mongolia, a new leader for India, The Cree, Georgia, Scotland, and the Mapuche.

You can watch the full teaser here.

The Zulu’s unique ability is Isibongo. Units upgrade to Armies and Corps when they capture cities. Additionally cities with garrisoned units provide extra loyalty. Their unique infrastructure is the Ikanda. Which is a replaces the Encampment District. It provides +1 housing and once you unlock the ability to make Army’s and Corpse, you can build them outright. They can also be built much cheaper than normal. The Zulu once again wield their Impi warriors. This time around the Impi replace the Pikeman. The Civ 6 version of the Impi have several unique benefits. They have an increased Flanking bonus, are less expensive than similar era units, earn experience faster, and cost less maintenance. As expected, the Zulu are focused on doing one thing. Fighting. Shaka’s unique ability only aides this further. His Amabutho ability unlocks the building of Army and Corps units earlier than normal and have extra combat strength.

The Zulu are easily one of the most aggressive Civ’s in the game. He should be instantly feared when you see him, and should not be trifled with in the renaissance or Industrial era. Once he has his Impi, things will be very, very difficult for you. Fortunately their bonuses are all geared towards these mid game benefits. If you encounter him early, swift and decisive military action in the Classic or Medieval should bring you success. They will be unaffected by most normal maps, save Island plates (all non naval Civ’s have a hard time with that). However, TSL maps are where things get really interesting for them. They will spawn in South Africa and should have little problem laying waste to the Kongo just north of them. Nubia lies ahead of that, with Cleopatra and Saladin at the peninsula. All the African Civs have early to mid game benefits. Given the passive nature of the Kongo, I expect the more aggressive Zulu AI to steam roll them. Once they reach Nubia and Egypt, both of their unique units will be obsolete. Leaving the Impi armies free to lay waste to them. However, despite how well poised they are to take Africa, they will realistically need to put some time into building a navy to escort their Impi to wherever other Civilizations lie.

The Zulu, like all the other Civs, release tomorrow when Rise and Fall goes live. I will have to wait until the weekend before I can dive into it, but I can’t wait to do so!

Sid Meier's Civilization VI is a turn-based strategy that offers players new ways to interact with their world, expand their empire across the map, advance their culture, and compete against history’s greatest leaders to build a civilization to stand the test of time.

Sid Meier’s Civilization VI sets another milestone in the Civilization franchise, which has sold-in over 34 million units worldwide and changed the gaming landscape by bringing the strategy genre to unparalleled heights. In Sid Meier’s Civilization VI, cities will physically expand across the map to create new, deep strategic layers, active research in technology and culture will unlock new potential ways to play; and the large variety of leaders will pursue their own agendas based on their historical character traits as players race to achieve victory however they choose to play.

Civilization VI:Rise and Fall brings new choices, strategies, and challenges for players as they guide a civilization through the ages. The expansion introduces new Great Ages, a new city loyalty system, and Governors while expanding existing Diplomacy and Government systems; and adds nine new leaders and eight new civilizations, a variety of new units, districts, wonders, buildings, and more. Players can now lead their empire into a Golden Age of prosperity or emerge triumphantly from a Dark Age into a memorable Heroic Age.

Unquestionably one of military history’s greatest commanders, Shaka’s reforms to the Zulu armies gave them efficiency, organization, and lethality – making the impi one of the most feared forces in the world. Equally notable are Shaka’s wrath and grief which resulted in thousands of lives lost on the African continent.

He was born the illegitimate son of Zulu chief Senzangakhona, and Nandi, the daughter of a Langeni chief. The Zulu chieftain would eventually exile Nandi and Shaka. Driven out and scorned, Nandi found safe haven with the Mthethwa chief, Dingiswayo.

During this time, Shaka enrolled in the ibutho, a traditional regional military cadre program. Young men of the same age group would get grouped together into a unit within the ibutho, and the unit would eventually disband when the men aged out of the warrior class. Shaka’s unit served under the command of the chief. Dingiswayo laid the groundwork for the system of command that would eventually be brought to ultimate refinement under Shaka.

When his biological father died in 1816, Shaka, by now a renowned commander in his own right, left Dingiswayo’s armies and returned to lead the Zulu, who were at this time the smallest of the region’s Bantu clans. Southern Africa would quickly learn to fear the Zulu.

Shaka immediately reorganized the army and its training. The age-grade system of the ibutho was refined and strengthened into an age-based regimental organization, with each regiment having a distinct fortified village (or ikanda), uniform heraldry on their ox-hide shields, specific ornamentation in jewelry and headdresses, and sworn loyalty to Shaka. Organization of the impi and its tactics were standardized. Shaka introduced a corps of officers, promoted on the basis of merit and ability, from all the subordinate tribes. Comparisons to the Marian reformations of the Roman Legions are apt; both commanders took control of fundamentally competent basic forces, and transformed them into unstoppable military machines.

Shaka then took his impi on a march of conquest. His first conquest was said to be the Langeni, who humiliated him as a boy. When his former commander Dingiswayo was assassinated by the rival Zulu chief Zwide, Shaka swore vengeance, and a full-scale civil war of the Zulu broke out. Zwide was decisively routed at the Battle of Gqokli Hill by a force half his size under Shaka’s command.

But Shaka’s reign was not uncontested. There was substantial opposition to his policies within his own kingdom. Escalation of warfare between tribes into near-extermination were a marked change from previous patterns of war. Tensions were exacerbated when Shaka granted European traders concessions. But it was the death of his mother in 1827 that seems to have marked the beginning of the end of Shaka – and the bloodiest part of his reign.

Grief-stricken, Shaka ordered that no crops be planted, nor milk used for a year (and milk was the staple of the Zulu diet). Women found pregnant were to be killed with their husbands, as was anyone found to be insufficiently mournful. Cows were to be slaughtered “so that calves would know what it was like to lose a mother.” 7,000 of Shaka's subjects were killed in his grief, according to accounts.

His two half-brothers had been actively conspiring against him for some time. In 1828, while the impi were on campaign to the north, he was assassinated by his half-brothers Dingane and Mhlangana, along with a third co-conspirator named Mbopa. Tradition states that Shaka’s dying words were a warning both about the growing power of the Europeans in South Africa and about the peril of Zulu disunity.

The meteoric rise of the Zulu under Shaka, coming at a time of increasing European colonization in the region, had a profound and complex impact on the history and culture of Southern Africa, whose implications are still debated and considered. Shaka’s legacy as a ruler is not a simple one, even within Zulu culture today. But his impact on the history of the world is beyond question.

The powerful warrior regiments of the Zulu were already a formidable force when the ambitious Shaka taught them new techniques: combining the iklwa (a short stabbing spear with a broader blade than a throwing spear) and the ishlangu (a large, oval shield with cowhide layered on top). They trained to form shield walls, both to blunt projectiles and to hide their true numbers, and attack with a “buffalo horns” formation – greener troops would sweep out and around to pin the enemy’s flanks (the horns), while a more experienced center would slam into the pinned enemy (the rest of the buffalo).

The impi training regimes under Shaka were nothing less than brutal, but harsh conditioning led to tightly bonded, well-disciplined soldiers able to carry out complex formations with ease. These Pikeman replacements have an increased flanking bonus, are less expensive than other combat units of the same era, have a low maintenance cost, and earn XP faster.

The ikanda (also known as a “kraal” or “umuzi”) were self-sufficient, fortified Zulu homesteads. A double palisade protected its residents—the inner wall kept livestock in and the outer wall kept interlopers out. Ikanda were ideally placed uphill for reasons both practical and strategic: rainwater flowed downhill to clean the ikanda, while opponents were forced to attack an elevated position. Within Shaka’s military structure, a regiment would be stationed in an ikanda. It’s where they trained and lived.

As the Zulus conquered and absorbed neighboring tribes, more ikanda would sprout up. These encampment replacements, unique to the Zulu – provide additional housing. Once Civic or Technology prerequisites are met, Corps and Armies can be built outright. This also leads to faster Corps and Army creation. 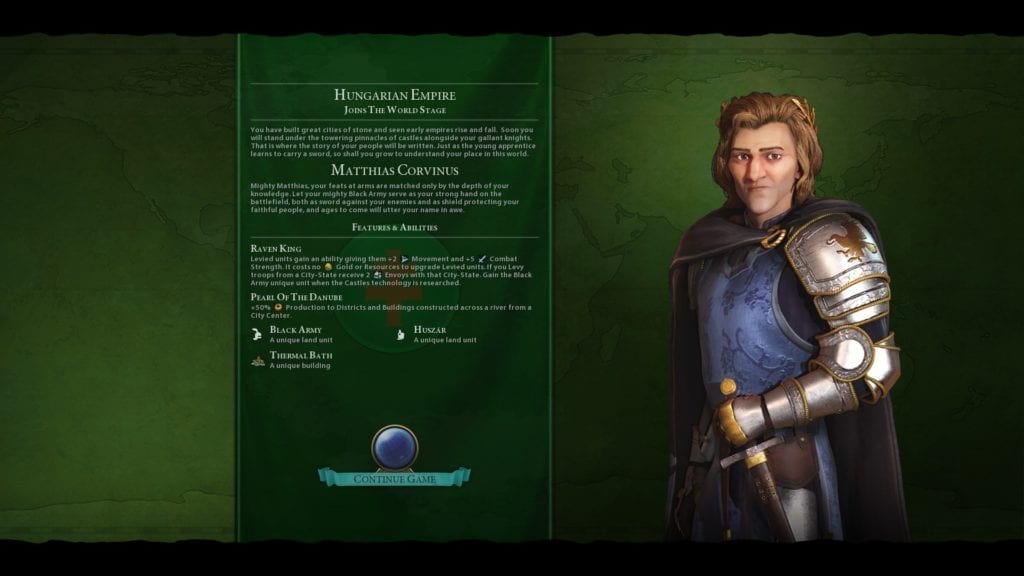 By the age of 23, Shaka lead an impi regiment. He continued his rise based upon his deeds, becoming one of chieftain Dingiswayo’s most highly-regarded commanders. Shaka was also known for drilling and rearming his troops, trading light throwing spears (assegai) for the broad-bladed iklwa and large cowhide-covered shields. As a result, in the game, Shaka may form Corps (Mercenaries Civic) and Armies (Nationalism Civic) earlier. Amabutho alsoprovides an additional Base Combat Strength to both Corps and Armies.

A tribe, once conquered, was subordinated into the Zulu kingdom, its young men were incorporated into the ibutho, and then the Zulu marched on. Shaka also offered diplomatic carrots, with the stick of the impi ever-present. That’s reflected in the game with Isibongo. After Shaka conquers a city, it gains bonus Loyalty when garrisoned. Conquering a city with a unit will upgrade it into a Corps or Army, if the proper Civics are unlocked.

Sid Meier’s Civilization VI: Rise and Fall will be available for PC on February 8, 2018.